Surprisingly good April retail sales growth and preliminary signs of strong May consumer sentiment suggest a continued strengthening of consumer spending. Higher wages and low but rising inflation expectations boost individuals’ willingness to make discretionary purchases. Recent quarterly earnings data suggest that these purchases are increasingly taking place through Amazon and online retailers rather than department stores. Equities were lower over the past five trading days, partially as a result of poor earnings data from the latter. Jobless claims increased in the first week of May, but remain within a reasonable range. The yield curve flattened during the week as the spread between ten-year treasury bonds and three-month t-notes fell to its lowest level since February. The dollar appreciated against most major currencies.

Retail sales excluding food increased year over year by 2.7 percent in April. This is the second largest increase since January 2015 (the largest in the past 15 months was in February). In April, Retails sales overall were up three percent over the previous year and up a surprising 1.3 percent over the previous month. Many online retailers, including Amazon, had their strongest-ever quarter in Q1. Meanwhile, this week’s earnings releases from Nordstrom, Kohl’s, and Macy’s shows a continuation in consumers’ pivot away from U.S. department stores. U.S. equities closed lower on the week, with the S&P down half a percent, the Nasdaq down 0.4 percent, and the Dow down 1.2 percent.

Prices remain low with some hills on the horizon

The uptick in retail sales can be attributed in part to higher wages for consumers, as evidenced in recent labor market data. Additionally, fuel prices remain low, yet there is some sign that movement is towards increasing price levels, which incentivizes spending today, especially given a very low return on savings. The April producer price index (PPI), which measures how prices of the inputs to production change, was released this week. The PPI for all commodities (intermediate demand) increased to a -4 percent year over year change, from -4.8. Energy prices fell less dramatically in the twelve month period ending in April. Oil prices climbed 3.5 percent during the past week, but remain below $50 a barrel, at $46.21. 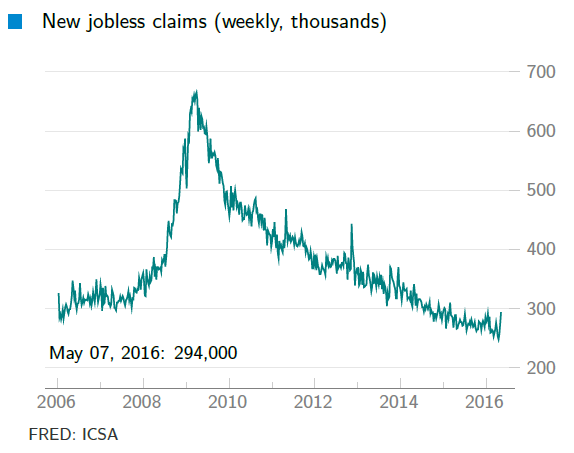 Another potentially startling indicator is the flattening of treasury yield curves, but again, there is an explanation to assuage concern. The yield spread between ten-year treasuries their three-month t-bill counterpart fell to 1.43 on Friday, from 1.6 a week earlier, as ten-year yields fell and three-month yields rose. Likewise, the spread between ten- and two-year treasuries fell. While this indicator is a potential bad omen, we must remember that foreign inflows to treasury auctions have been increased by negative interest rates in many EU countries and Japan. For example, as ten-year Japanese Government Bond yields remain negative, Japanese investors increasingly shift portfolios to the U.S. government equivalent.

I’ve redesigned the exchange rates table to be quicker to read, and include it below.