Last month, I pointed out 7% wage growth at the first decile (10th percentile). The CEA noted this same figure in a recent report, claiming credit for the uptick at the bottom of the wage distribution. My piece, in contrast, had assigned credit to the state, local, and company minimum wage increases. AEI has a piece that thanks both the long expansion and the minimum wage increases.

The AEI piece points to Atlanta Fed analysis showing that states without state minimum wage hikes have seen increases in the median wage of the first quartile (bottom 25%) of wage earners. This makes a strong case that state minimum wage increases only explain part of the story. But it’s worth testing the argument that if additional states had raised their minimum wage those states would have seen larger wage gains for low-wage workers. That is, by making the wrong decision the no- and low-minimum wage states fared worse, but despite making the wrong decision, they still fared reasonably well.

A test of my claim comes from comparing total hours worked in different wage groups and in two state groups: those that raised the state minimum wage from 2016 to 2019 and those that didn’t. To better capture total wage income, aggregate hours are used instead of number of workers. In the baseline data which cover 2016, slightly more than half (55.4%) of hours worked in the US were from people in the 27 states with minimum wage increases during 2016-2019. This is how the total hours worked are distributed by wage group and state group in 2016: 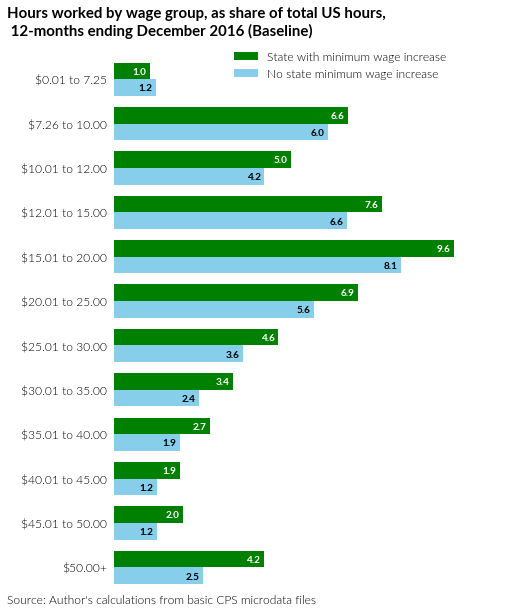 Notably, the share of hours that are paid the federal minimum wage or less is low; several times as many hours of work were paid between $7.26 and $12.00.

In the latest year of data, which ends November 2019, the story has changed: 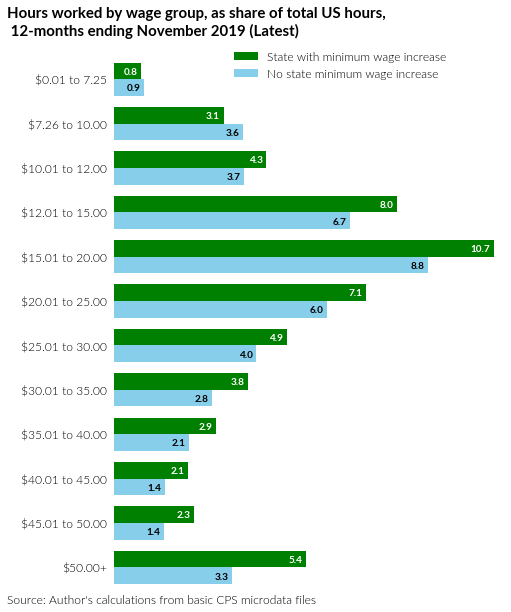 Looking more closely at the data, the long economic expansion does deserve some credit for wage growth at the bottom of the distribution. Importantly, states that acted to raise minimum wages better shared the economic expansion with low wage workers.

One thought on “Who gets credit for the wage growth of low wage workers?”