Mismatches between the timing in life of labor income and major expenses cause unnecessary poverty in the US. Labor income (earnings from working) is most common between the ages of 25 and 54 and tends to be highest in amount for people in their 40s and 50s. In contrast, education expenses accrue disproportionately to young adults, and healthcare expenses are higher for the elderly. As another example, new parents tend to have lower wages than parents of teenagers while childcare expenses are very high in the first few years of a child’s life. These mismatches between the timing of income and expenses create financial stress and poverty.

One way to see this is to look at poverty by age: 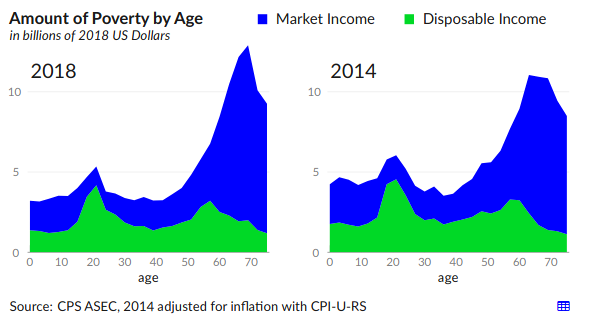 The blue area shows the dollar amount of poverty reduced by the combined welfare programs and tax credits. The green area shows the amount of poverty remaining after taxes, welfare, and medical, work, and childcare expenses. The large blue area on the right of each graph shows that market income leaves enormous poverty for the elderly, but that this poverty is reduced to below-average rates by programs such as social security, supplemental security, and medicare. These programs are absolutely critical to poverty reduction but still leave some elderly in poverty.

Two age groups that stand out as facing higher-than-average levels of poverty by disposable income are young adults (students and new parents disproportionately) and those before social security retirement/medicare eligibility age. These groups correspond to the bump in disposable income poverty (green area) around age 20 and again around age 60. These age groups are less likely to work relative to 25 to 54 year olds and therefore have less labor income. Unlike 25 to 54 year olds, those who are younger or older have expenses higher than their income, hence the poverty caused by the mismatch in the timing of income and expenses.

Total poverty is defined as the dollar amount of resources that people are below their Census-defined “poverty threshold”. In the case of market income it is the total amount of money that would need to be given to people for their before-tax labor and capital income to equal their poverty threshold, according to the Supplemental Poverty Measure (SPM). Total poverty by disposable income corresponds with the SPM-poverty-rate-based amount of poverty.

Full employment–a version of the US economy where anyone who wants a job has one–is an important complement to welfare for poverty reduction, but ultimately not a substitute for welfare.

Why is full employment important?

Full employment means more labor income for people. A single person working full-time and full-year will have income above the poverty threshold, even if earning the minimum wage.

Typically full employment is also associated with less discrimination in hiring and with workers getting a stable share of output growth. Achieving full employment also better positions the US to provide for people who cannot or should not be working.

Are we at full employment?

The US is likely close–within a few million jobs–to full employment. Many economists had expected runaway inflation as the US unemployment rate fell below 5.5% but inflation has been well-contained. Unemployment is now around 3.5% which is near to historical lows.

What can’t full employment do?

The previous example is fairly intuitive, but what people don’t realize is just how few people actually work full-time and full-year, even in a near-to-full-employment economy.

In 2018, no part of the US had even 42% of its total population working full-time and full-year: 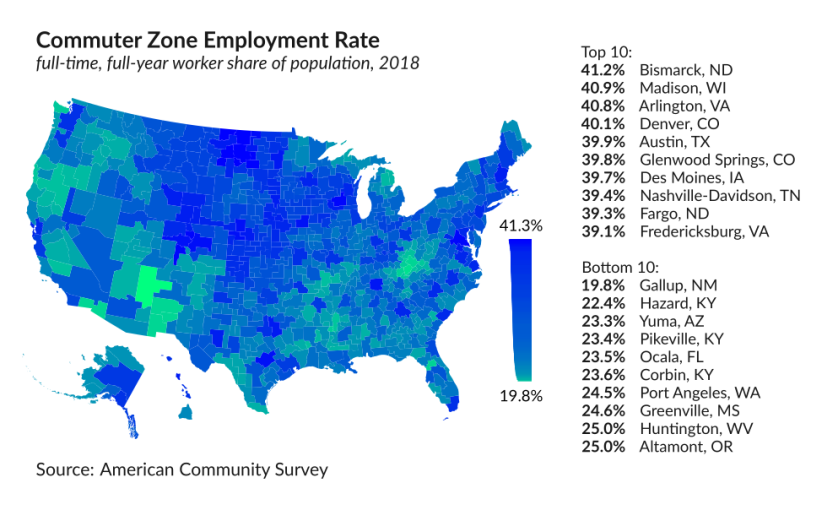 The map shows commuter zones–groups of counties that form local labor markets. Even with the economy near full employment in 2018, no part of the country has a majority of its population fully-employed. That is, even when the US is maximizing its number of workers, there are still large gaps in labor income over time and within any given point in time. And reaching the people not reached by labor income in full employment is precisely what welfare is for.

Data reject the argument that welfare is not needed in full employment. Non-earners comprise a large share of every country’s demographic picture, even at full employment, and non-earners are unevenly distributed within families. This combination means poverty cannot be solved through labor income alone. Existing welfare programs in the US, like unemployment insurance, provide income for earners who lose their job; separately, there are welfare programs that provide income to non-earners regardless of the state of the economy, such as low-income, low-asset elderly reached through Supplemental Security Income. Other countries show that adopting additional programs, for example a child allowance, would effectively and immediately reduce poverty from its stubbornly high rate.

Last month, I pointed out 7% wage growth at the first decile (10th percentile). The CEA noted this same figure in a recent report, claiming credit for the uptick at the bottom of the wage distribution. My piece, in contrast, had assigned credit to the state, local, and company minimum wage increases. AEI has a piece that thanks both the long expansion and the minimum wage increases.

The AEI piece points to Atlanta Fed analysis showing that states without state minimum wage hikes have seen increases in the median wage of the first quartile (bottom 25%) of wage earners. This makes a strong case that state minimum wage increases only explain part of the story. But it’s worth testing the argument that if additional states had raised their minimum wage those states would have seen larger wage gains for low-wage workers. That is, by making the wrong decision the no- and low-minimum wage states fared worse, but despite making the wrong decision, they still fared reasonably well.

A test of my claim comes from comparing total hours worked in different wage groups and in two state groups: those that raised the state minimum wage from 2016 to 2019 and those that didn’t. To better capture total wage income, aggregate hours are used instead of number of workers. In the baseline data which cover 2016, slightly more than half (55.4%) of hours worked in the US were from people in the 27 states with minimum wage increases during 2016-2019. This is how the total hours worked are distributed by wage group and state group in 2016:

Notably, the share of hours that are paid the federal minimum wage or less is low; several times as many hours of work were paid between $7.26 and $12.00.

In the latest year of data, which ends November 2019, the story has changed:

Looking more closely at the data, the long economic expansion does deserve some credit for wage growth at the bottom of the distribution. Importantly, states that acted to raise minimum wages better shared the economic expansion with low wage workers.