Policymakers may have accidentally demonstrated that they have the skills needed to curb the pay of the top earners in a profession. Unfortunately, these problem solving skills were not applied to CEOs, who regularly get paid a thousand times what their middle-paid worker makes. Instead, some state lawmakers have tackled the non-existent problem of teachers making too much money.

In 2016, public school teachers in the states with recent strikes or large scale protests (West Virginia, Oklahoma, Arizona, Kentucky, North Carolina, and Colorado) are paid about three dollars per hour less than other teachers nationwide. This is not new. After adjusting for prices, the gap was about the same in 2006. What has changed is teacher pay near the “top”. In 2006 a public school teacher making $40.93 per hour (in 2016 dollars) makes more than 90 percent of public school teachers nationwide, while it takes an hourly wage of $37.95 to make more than 90 percent of teachers in states with strikes and protests. The nationwide 90th percentile wage ticked up to $43.27 by 2016, but fell to $34.98 for the states that have subsequently organized strikes and protests. 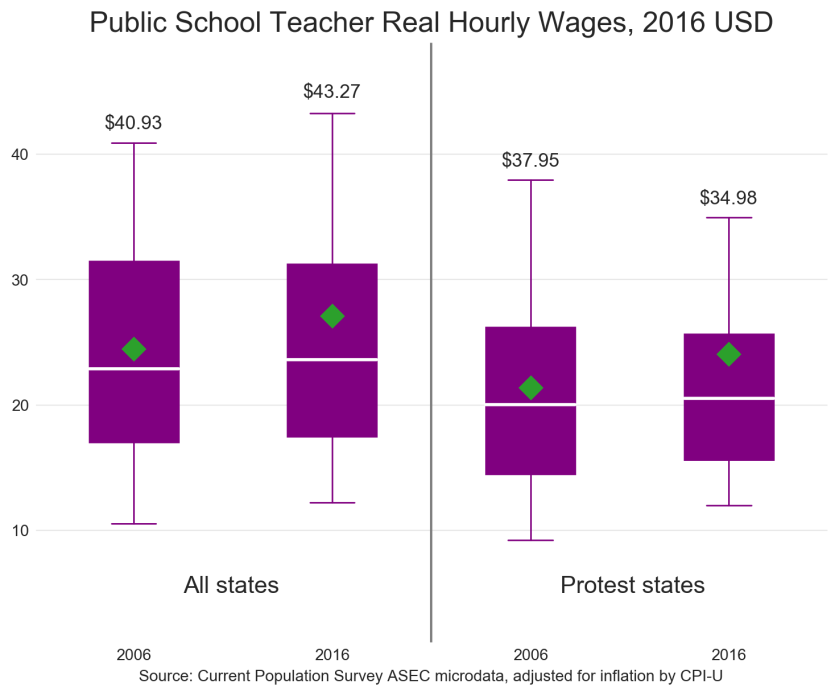 The top half of the public school teacher wage distribution is already low compared to other occupations. But after state efforts to curb teacher pay, 90 percent of the public school teachers in states with strikes and protests make less than $35 an hour, and more than a quarter of the group is paid less than $16 an hour. These hourly wage figures are based on annual earnings in the March CPS, so they already account for differences in weeks worked per year and hours worked per week, and are therefore more comparable to the hourly wages of other occupations. Using these wage values, teachers, relative to other occupations, have the additional burden of being paid, on average, for fewer hours per year, making it harder for them to make ends meet.

Policymakers should reverse the misguided efforts to cut teacher pay. If anything, teachers should be better rewarded for their contribution to society. It shouldn’t take strikes and protests to make this point.

Technical note: The box plot above shows the average (green diamond), median (white line), 90th, 75, 25th, and 10th percentile hourly wage. Public school teachers are identified as persons in occupations 2200 to 2340 who are employed by the government. The hourly wage variable is generated as the ERN-VAL / (WKSWORK * HRSWK).

From 2001 to 2013, college enrollment in the US increased rapidly. Young people delayed the full-time work portion of their lives, ostensibly to seek skills for an evolving set of jobs. Trends since 2014, however, suggest that the increase in education is not an entirely structural change. Over the past few years, a tighter labor market has been leading more young people to full-time work, suggesting that a weak labor market, rather than concern over a changing set of jobs, was pushing some young people to enroll from 2001 to 2013.

While data show a long-term decrease in full-time employment among younger people, the same data also show two signs that a weak labor market plays a role. First, the full-time employed share of both age groups has increased steadily since 2014. As of the year ending in March 2018, 28.3 percent of those age 19 to 21, and 52.2 percent of those age 22 to 24, are employed full-time.

Second, if education were driving the change in youth employment then summer youth employment would increase relative to school-year employment. Since most US schools offer students a summer break, the share of young people employed full-time during June, July, and August is much higher than at any other point during the year. If young people are opting for school because of abundant attractive new jobs, then summer break might provide an increasing chance for full-time employment for those in school during the rest of the year. However, summer full-time employment has actually fallen relative to school-year employment, suggesting the opposite, that young people are having a harder time obtaining summer jobs compared to the period from the mid 1990s through 2001.

The weak labor market therefore plays a role in encouraging school enrollment; those who are able to do so can wait out a poor set of job opportunities while gaining new skills. It’s important to note, however, that the tighter labor market since 2014 seems to have slowed, but not reversed, the previously rapidly increasing share of young people who are not in the labor force, and do not want a job, because they are enrolled in school.

In 1994, for about half of those age 19 to 21 who are not in the labor force (meaning they are not employed and have not been looking for work) the reason was school enrollment. The rest are often staying home to take care of family, disabled and unable to work, or sometimes believe that there is no job available. Since then, school enrollment has rapidly increased labor market non-participation. By the latest data, covering the year ending in March 2018, more than two thirds of non-participation is due to school enrollment. Among those age 22 to 24, the rate climbs from about one third in 1994 to about one half in the latest year of data. School-related non-participation growth among the slightly older cohort has largely stalled since 2013, while growth has slowed some among the younger group.

Much of the overall drop in full-time employment among young people comes from school enrollment. At least some portion was motivated by the particularly poor quality of the labor market during the years from 2001 to 2013, with students hoping to emerge more competitive and ideally at a time when job applicants have more bargaining power. It remains to be seen how much the Fed will allow the labor market to tighten  and how full-time employment and school enrollment will respond among younger people.